March 25, 1911 was the date of the infamous Triangle Shirtwaist Fire in New York City. The fire exits were blocked, windows to the fire escapes were nailed shut, 146 garment workers perished. Many cite it as the beginning of the labor movement in this country.

Yesterday the U.S. Department of Labor levied fines against C.J.’s Seafood, a Louisiana supplier to Wal-Mart for violations including a blocked exit door, unsafe electrical outlets, and a lack of fire extinguishers and exit signs. All this in a plant where shrimp were peeled and boiled by workers who were not paid the minimum wage or overtime, were forced to work 24 hour shifts and were threatened with violence against them and their families if they complained. To its credit, Wal-Mart suspended C.J.’s as a supplier when it found out about these abuses and violations. Full details are in the link below.

Has nothing changed in a century? Are workers lives still seen as so insignifigant that they are treated like this? Why are employers allowed to sacrifice employees on the altar of profit? How long will this disregard continue?

I understand the state our economy is in. I know that people are desperate for work. But how many of you reading this right now would be willing to work under these circumstances? I’d wager the answer is zero. In that case, we need to speak out whenever we see labor injustice or worker abuse. As it was so aptly stated by Martin Niemoller:

First they came for the communists,
and I didn’t speak out because I wasn’t a communist.

Then they came for the Jews,
and I didn’t speak out because I wasn’t a Jew.

Then they came for me
and there was no one left to speak out for me.

Am I missing something? Please help me to understand this.

A yoga teacher who was contracted to lead classes at Facebook was fired for glaring at a participant who was texting while in the class. The first time the woman was on her phone the instructor asked everyone to please turn off their phones while in class. The second time the instructor saw the same woman on her phone she said nothing but must have  given her one killer look. The texter stepped out briefly, and then returned to class.

Two weeks later the yoga instructor was terminated by the company that provides yoga teachers at Facebook.

Now comes the part that doesn’t make sense (I bet you thought we’d already fallen down the rabbit hole).

The instructor had been told previously that she couldn’t enforce a ban on cell phones in the class. Apparently Facebook wants their people on call 24/7, even while attending the classes the company provides so employees can find a few moments of peace in their hectic schedules.

So here’s the disconnect:

I guess I have a hard time with hypocrisy. Facebook wants to present itself as this cutting edge company with foosball, yoga classes, and scooters in the halls. Then they act as buttoned up as IBM when someone tries to avail themselves of these benefits.

Maybe it’s me. Your thoughts, comments, and opinions are most welcome.

When I was kid my mom had two antique perfume bottles on her dressers that had big prisms as stoppers. I loved when the sun would hit them and cast rainbows all over the room. I would lie on the floor and watch the rainbows move across the ceiling. 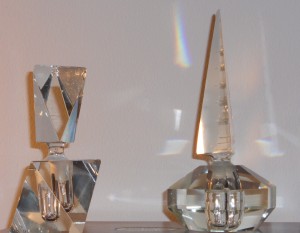 Human Resource departments, and particularly Learning and Development, are like prisms. Employees come in like a ray of sunshine, hit the prism and all the composite parts of the employee come into view. We hire people to do a job, and then, very often, once they are with us for a while we start to learn how much more they have to offer. That’s when the employee hits the prism and we get a peek at all the colors inside. We’re generally happy to see the sun, and we’re usually pretty glad when someone new joins our organization because they’re going to fill a need. As we get to know them we see their full spectrum.

We need rainbows in our organizations. You don’t want all your employees to be lockstep thinkers. We need some diversity of thought, of ideas, of solutions. Einstein is reputed to have said, “We will not solve the problems of today using the same thinking we used when we created them.” That’s the approach we need to foster in HR. Don’t  be afraid to promote different ways of getting the job done. There are as many paths to productivity as there are colors in the rainbow. Celebrate them all.

Here’s a very interesting query I received from a friend on behalf of her daughter. Perhaps you’ve felt like this. Perhaps this was you when you were her age. Perhaps I have some advice.

“My daughter will soon be 28 and she is applying to a PhD program at a prestigious Midwestern university in the area of human development.  But in the meantime, she is grappling with the, “I’m-28-and-is-this-all-there-is?” thoughts about life.

She has had very responsible jobs since graduating from college at age 20.  She spent two plus years, in the Peace Corps as an AIDS educator in Swaziland. She has been a successful writer and blogger on gender/sexuality issues.  She has self-published two books this year and the first reached #1 in two of Amazon’s categories for a couple weeks. She is a blog editor of a widely-read blog at a well-regarded site in her niche industry.  For two years she was a columnist for a Chicago newspaper.  There’s a bunch of other things she’s done including speaking and guest lecturing at colleges and universities, including Harvard, Yale, and Stanford.  She knows I’m writing to you. If you have any suggestions, we would both be most grateful!”

And the question before us today is, “Is this all there is to life?”. Pretty simple. Yes. This is all there is. This is your life. But it sounds like she has made it an incredibly interesting one so far. Graduated college at 20. Peace Corps. Published author. Blog editor. Many 28-year-olds would give up their iPhone to have such a life. But she’s not done. Not by a long shot. Now she’s taking on her next challenge, committing to getting her PhD.

So I’m sorry, but have I missed something? Would she rather be sipping Stoli in Gstaad with czarinas doing lines of coke? I doubt it, but people think that’s glamorous. It’s not. Believe me, I know it without trying it. And it’s not her. She is crafting a life. It’s a lifelong task. Many people who get to be 28 think they should have it all figured out by now. I’m 57 and I’ve almost got some of it figured out. But whenever I think I can file something away as “Done”, something changes and I’m not done.

We’re never done. My father-in-law just turned 100. He’s not done. He’s still figuring things out. He reads constantly. History, biographies, science journals, Popular Mechanics, National Geographic. And this man never went to college because he graduated high school in June of 1930. And he’s the wisest man I’ve ever known. Because he’s spent a life crafting a life, learning how to live his life, and never thinking it was going to get easier. Just more challenging.

Allison West, of Employment Practices Specialists (on the West Coast) has wonderfully captured some insights shared by Jerry Seinfeld at last week’s SHRM Conference. Now you may not think of Mr. Seinfeld as an HR practitioner, but Allison has distilled some of his thinking and applied it beautifully to Human Resources.  Thank you Allison for allowing me to share your thoughts here as we Continue the Conversation.

What I Learned From Jerry Seinfeld by Allison West
Last week Jerry Seinfeld was the entertainment at the SHRM Annual Conference held in Atlanta. He was dressed in a suit which I greatly admired – he took his audience seriously. He was in perfect form and had about 15,000 of us laughing for over an hour. Here are some takeaways from his wonderful performance:

1. Watch your tone. Now Jerry spent quite a bit of time relaying how his wife didn’t like his “tone.”  I am sure you can all relate whether it is your wife, husband or parents telling you about your tone.  When it comes to the workplace, how HR and managers relay their message is often impacted by the tone we use.  Pay attention to how others view your words, demeanor and intent. Do they line up?

2. Stop sitting so much.  Jerry’s opening routine was about sitting. We are all looking for the next place to sit.  One popular management technique is to manage by walking around. The same holds true for HR. Get up out of your chair and walk around – visit with employees and managers.  Let them know that your open door attitude goes both ways and that you are willing to get out of your chair to meet, greet and assist.  By walking around you may actually learn more about issues, concerns and ways you can help.

3.  Watch your words.  Pay attention to the words you use and how you use them – they have many meanings.  Ask folks for their definitions – listen and connect.  For example, an employee may say they feel “uncomfortable.”  I know what that word means and so do you. But, maybe the employee has a different definition and by asking you can gain insight to a particular issue going on.  The words we select can give away a lot of information – don’t miss out on a great opportunity to learn and be able to assist your employees.

Tone, Movement, and Language. Excellent reminders Allison, thanks for sharing.

Have a safe and happy Fourth of July everyone.
Remember, fireworks, like HR, are best left in the hands of professionals!