Would you pay full price when you’re only going to use 60% of the product? If you have a five point performance rating scale (the most common iteration) yet no one ever gets the highest or lowest rating, then you’re only using 60% of the system. In fact, SURPRISE, you actually only have a three point scale. 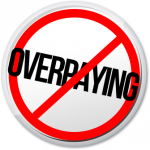 Whatever the reason for not using the highest or lowest rating, and I think I’ve heard them all, the company is sending a very muddled message to the employees.

“If we give him the lowest rating he’ll get demoralized and demotivated.” If an employee’s output is so minimal that you’re considering the lowest rating, he’s likely already demoralized and stopped trying to accomplish anything long ago. “Well, we don’t want to hurt his feelings.” Really? I’m much more impressed by a manager who doesn’t want to hurt the bottom line!

On the other end of the spectrum is “we don’t want to give her the highest rating because she’ll get complacent.” Don’t worry. Someone that good is never going to get complacent. If she’s so good that you’re considering the highest rating, she’s probably self-motivated enough to want to keep up that pace to replicate that performance, and hopefully that reward. This is the person you have to worry about demotivating. She knows that her performance is good enough to warrant the highest rating so when she doesn’t get it, that’s demotivating. This is the employee whose enthusiasm and performance I would hate to diminish. And also the employee I’d hate to lose because she doesn’t feel appropriately recognized for her hard work.

So you may think I’m advocating for a Jack Welch GE-style three tier evaluation system. Nothing could be further from my mind. If you have a five level evaluation system, use it to really differentiate employees’ performance. When a manager fails to use all the tools at his or her disposal, it’s like a six cylinder car that’s only using four. Turbo charge your performance management system by using every level appropriately and then you’ll be getting more bang for your buck.