I suppose it’s possible that the New York Police Department had never heard of the Pregnancy Discrimination Act. I mean it’s been 37 years since it was passed and I acknowledge that they’ve had  lot on their minds since then. But when Officer Akema Thompson asked months in advance of the infrequently given sergeant’s exam to take a  make-up exam as the date of the exam was the same day as her due date, she was denied. Repeated requests from the officer and her union representative were also denied.  The final denial came three days before her due date as she lay in a hospital having contractions only hours before her son was born. You can read the full story here.

Officer Thompson didn’t give up the fight. She took the powerful NYPD, which allows other officers to take make-up exams for other reasons (religion, injury, military service), to court and won. She’s currently studying for the make-up exam which, it is acknowledged, can “alter the trajectory of her career.”

Standing up to your boss or organization in the face of blatant discrimination is hard. To do so when the organization is one with such a strong culture of obedience and following orders take enormous reserves of courage and resilience, characteristics critical to the success of any manager. That Officer Thompson is a woman fighting for her rights in an organization with overwhelming masculine traditions only made her fight harder and her victory that much more gratifying. 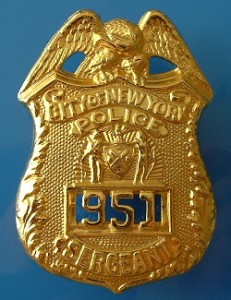 I think Officer Thompson will make an outstanding leader. The NYPD needs people like her. She is one brave police officer. I hope she passes.